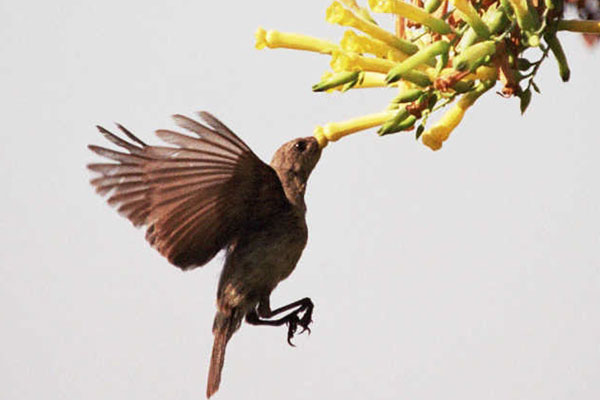 Most of the plant species on earth are animal-pollinated and thus floral nectar is regarded as the most important calorific and nutritional reward which animal-pollinated plants furnish to attract pollinators. However, whereas the presence of plant secondary metabolites (PSMs), frequently considered as ‘toxins’, in floral nectar is a widespread phenomenon, the study of their function is a new field in ecology. The traditional hypothesis is that the evolutionary interactions between flowering plants and nectar consumers (legitimate pollinators as well as nectar robbers) are mediated by nectar PSMs. Our central hypothesis is that PSMs are indeed mediators of the interactions between flowering plants and nectar consumers but mainly through the functions of the nectar microbiota and the gut microbiome of nectar consumers.

Hence, we will study (a) the role of gut microbiome of nectarivorous birds in detoxification of floral PSMs and in nitrogen supply for the host and (b) factors that govern the taxonomy and functional diversity of nectarivore’s gut microbiome including nectar microbiota, bird phylogenetic, geographic distance among host populations and diet.

We have identified suitable study system and have already completed several pilot studies that demonstrate the feasibility and potential of our project and suggest its success. Our focus will be on the plant Tree Tobacco (Nicotiana glauca) and its avian nectar consumers in the Old World (Orange-tufted sunbirds, Cinnyris osea) and in the New World (Glittering-bellied Emerald hummingbirds, Chlorostilbon aureoventris). Our methodology centers on (a) manipulation of secondary metabolite concentrations in artificial nectars, (b) manipulation of gut microbiome by antibiotics, (c) detecting 15N-lebelled artificial nectar PSM in bird feathers, (d) chemical analyses of nectar and bird droppings by GC/MS, HPLC (-MS) etc., (e) high-throughput barcoded Illumina sequencing of 16S rRNA gene (f) metagenomics and metatranscriptomics of gut microbiome, and (g) whole genome sequencing of dominant isolates from the nectar and the birds’ gut microbiota.

The project is multidisciplinary in approach, ranges from the molecular up to the ecological and evolutionary levels.  We see our proposal as highly original and novel not only for the methodological approach it adopts, but also because we expect our findings to (a) change ecological and evolutionary perspectives on plant-microorganism-animal interactions and (b) illuminate microbial role in pollination mechanisms.

The Department of Evolutionary and Environmental Biology